A hidden epidemic of shrinking jaws is behind many orthodontic and health issues, Stanford researchers say

The shrinking of the human jaw in modern humans is not due to genetics but is a lifestyle disease that can be proactively addressed, according to Stanford researchers.

For many of us, orthodontic work – getting fitted with braces, wearing retainers – was just a late-childhood rite of passage. The same went for the pulling of wisdom teeth in early adulthood. Other common conditions, including jaw pain and obstructed sleep apnea – when slack throat muscles interrupt breathing during rest – also just seem like par for the course.

The broader scientific community has largely deemed the underlying abnormality behind these problems as hereditary and untreatable and opted to deal with symptoms through medical devices and after-the-fact interventions. 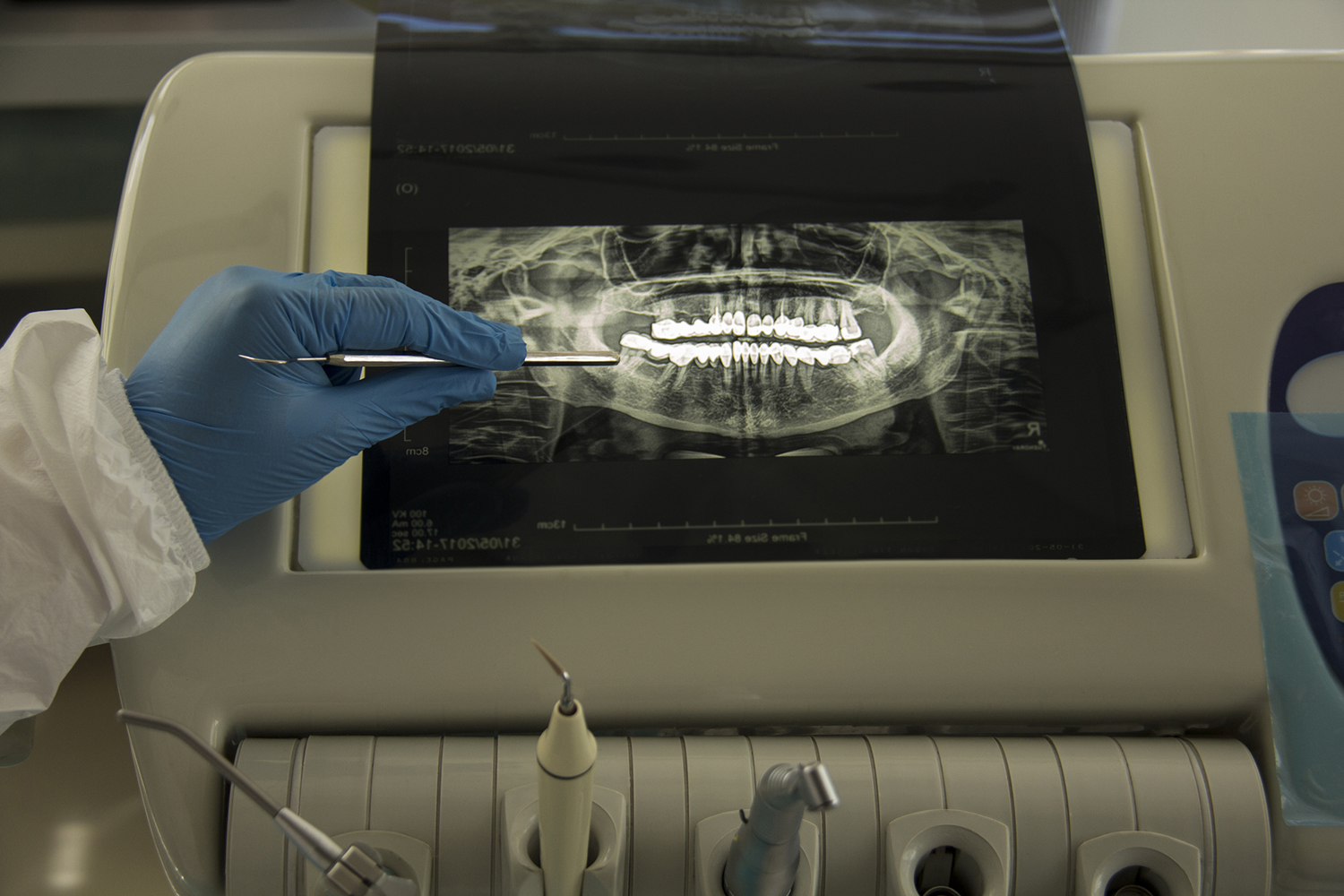 But in a new study, Stanford researchers and colleagues argue that all these issues and more are actually relatively new problems afflicting modern humans and can be traced to a shrinking of our jaws. Moreover, they maintain that this “jaws epidemic” is not primarily genetic in origin, as previously thought, but rather a lifestyle disease. That means the epidemic is largely the result of human practices and akin to obesity, type 2 diabetes, heart disease, and some cancers.

The study – published in the journal BioScience – marshals the growing evidence from studies conducted around the world surrounding the jaws epidemic, as well as how to address it proactively. Parents and caregivers can take steps to promote proper mouth, jawbone, and facial musculature development in children, the study advises, to help stave off future health burdens and chronic conditions.

“The jaws epidemic is very serious, but the good news is, we can actually do something about it,” said Paul Ehrlich, the Bing Professor of Population Studies, Emeritus, at Stanford and one of the study’s authors.

The new study builds upon a book Ehrlich co-wrote with an orthodontist and lead study author Sandra Kahn entitled Jaws: The Story of a Hidden Epidemic, published by Stanford University Press in 2018. Two other Stanford researchers, Robert Sapolsky and Marcus Feldman have contributed their expertise to the new study. Seng-Mun “Simon” Wong, a general dentist in private practice in Australia, was also a co-author.

Rooted in lifestyle, not genetics

Anthropologists have long noted the significant differences between the jaws and teeth in modern skulls compared to pre-agricultural, hunter-gatherer humans from thousands of years ago. The differences are stark even compared to humans who lived as recently as a century-and-a-half ago during pre-industrial times. These bygone humans showed little teeth crowding, impaction of their wisdom teeth (a leading reason for their surgical removal nowadays) or malocclusion – the abnormal positioning of the upper and lower teeth when the mouth is closed.

Assuming that genetics are chiefly responsible for the sudden modern rise of these dental maladies does not make sense, said Ehrlich. “There’s not been enough time for evolution over the span of only several generations to have made our jaws shrink,” said Ehrlich. Nor is there any evidence of selection pressures that would have favored smaller jawed-people producing more offspring – and thus perpetuating the trait – than regular-jawed people.

“The evidence of a genetic contribution to the jaws epidemic is not strong,” said Feldman, who is a population geneticist and the Burnet C. and Mildred Finley Wohlford Professor and professor of biology.

Instead, profound physiological changes can occur in human populations over short intervals, Feldman pointed out, purely as a result of environmental factors, such as dietary choices and cultural norms. For instance, since World War II, a switchover from heavy rice consumption to more dairy and protein in childhood has been linked to Japanese men gaining around 5 inches in average adult height.

This goes to show that in many cases, lifestyle choices can have just as powerful if not more of an influence on human traits than underlying genetics. “A genetic contribution to a trait, if there is one, does not necessarily sentence you to a life with that trait,” said Feldman. “In almost all cases, you cannot intervene medically to alter a genetic contribution; it’s not actionable. But what is actionable are the things talked about in this study, as well as Paul and Sandra’s book.”

Available evidence points to the jaws epidemic arising as humanity underwent sweeping behavioral changes with the advent of agriculture, sedentism (settling in one place for extended periods), and industrialization. One obvious factor is the softening of diets, especially with the relatively recent invention of processed foods. Also, less chewing is needed nowadays to extract adequate nutrition – our ancestors certainly did not enjoy the sustentative luxury of slurping down protein shakes.

A less obvious, though the more significant reason behind the jaws epidemic, Ehrlich and colleagues contend, has been the rise of what they describe as bad oral posture. Our bones grow, develop, and change shape under the influences of gentle but persistent pressures, multiple studies have shown. The proper development of the jaw and its associated soft tissues is guided by oral posture – the positioning of the jaws and the tongue during times when children are not eating or speaking. This positioning is especially important overnight during long sleep stretches when swallowing maintains the correct, gentle pressures. With both children and adults now sleeping on forgiving mattresses and pillows, instead of the firm ground as their ancestors did, mouths are likelier to fall open, disrupting positioning and swallowing.

To promote the proper development of the jaw, the answer is not to start sleeping on rocks. Rather, basic practices such as having children chew sugar-free gum, as well as giving babies less mushy foods as they transition to solid foods, can help, the researchers say. Kahn and Wong also practice what they call forwardontics, which includes exercises such as proper breathing and swallowing patterns to guide jaw growth in children as young as 2 versus waiting until children are older and require more severe interventions. To raise awareness of the jaws epidemic and how to better address it, Ehrlich and his co-authors have been giving lectures to conventions of orthodontists and seen some positive momentum. “There’s no question that some clinical practices are moving in this direction,” said Ehrlich, “but we have a lot more work to do.”

Better living, starting from the jaw

Benefits are not just limited to straighter teeth, roomier jaws, and stronger oral muscles. Cutting down on sleep deprivation from sleep apnea is another gain, which has myriad knock-on benefits. Sleep deprivation increases stress, which is associated with greater risks of heart disease, high blood pressure, depression, cancer, and Alzheimer’s disease in adult populations, and with attention deficit hyperactivity disorder in children.

“The maladaptive ‘jaws’ profile can disrupt our stress response and ultimately bring about greater stress and chronic activation of the body’s stress response,” said Sapolsky, the John A. and Cynthia Fry Gunn Professor and a professor of biology, of neurology and neurological sciences and of neurosurgery, whose research focuses on stress.

Ehrlich hopes that increased attention and research geared toward the jaws epidemic can turn the tide.

“We’re going to continue learning the causes of the jaws epidemic and continue getting the word out on how this is a highly treatable condition early on in life,” said Ehrlich. “Parents and caregivers, in collaboration with dentists and orthodontists, can all help children to avoid some serious health problems later on in their lives.”

Are You Considering Dental Implants? The Benefits are Endless!

Your reply has been successfully received.

Thank you for submitting your request. Our office will get back to you.